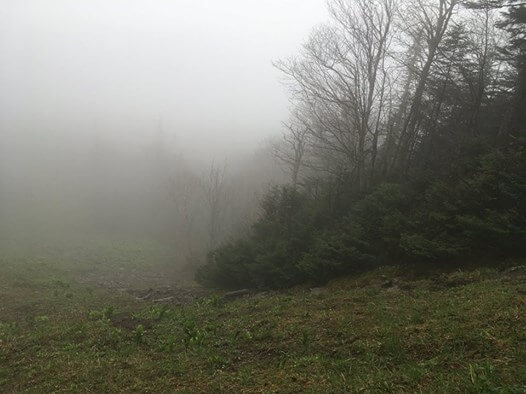 Posted at 11:22h in HIKE REPORT by Suttonbirds 0 Comments
0 Likes

Temperature 17 degrees
Rainy, foggy day.
The leaves at the base of the mountain are almost completely out, up at higher altitudes they are about half-way out.

We started at 7am but it started raining at 7:15! I kept going anyway since I dressed for rain and I hoped it would clear up.
I wanted to make it up to Round Top as I have not been yet this spring. I went up the Vogel trail then turned towards Round Top. At the fork for round Top or chalet 840 I had to go to the chalet 840 trail since there is major trail work on the Round Top trial. At that point the rain let up and the birds really came out! In a little opening I first heard the yellow-rumped warblers, then 7 other species all within 5 minutes. After a pause there for about 20 minutes I continued on and came out of the trail on the ski slope. It was very foggy but still not raining. A white throated sparrow sang its loud song very close to me. It was eerie in the fog! I saw 5 birds flying together and followed them. It was up the hill, so by the time I caught up my heart was pumping so hard that I couldn’t hold the view through the binoculars steady. Also they were in the fog which was coming and going as the clouds moved by! I figured out finally after observing for a while that they were pine siskins. There was a hare in the trail too as I turned back to go down the mountain.

Next week there is the Xtrail race on the mountain so the bird hike will be at hotel Horizon. 7am. All are welcome. Cost is $10 for non-PENS members and $5 for PENS members.