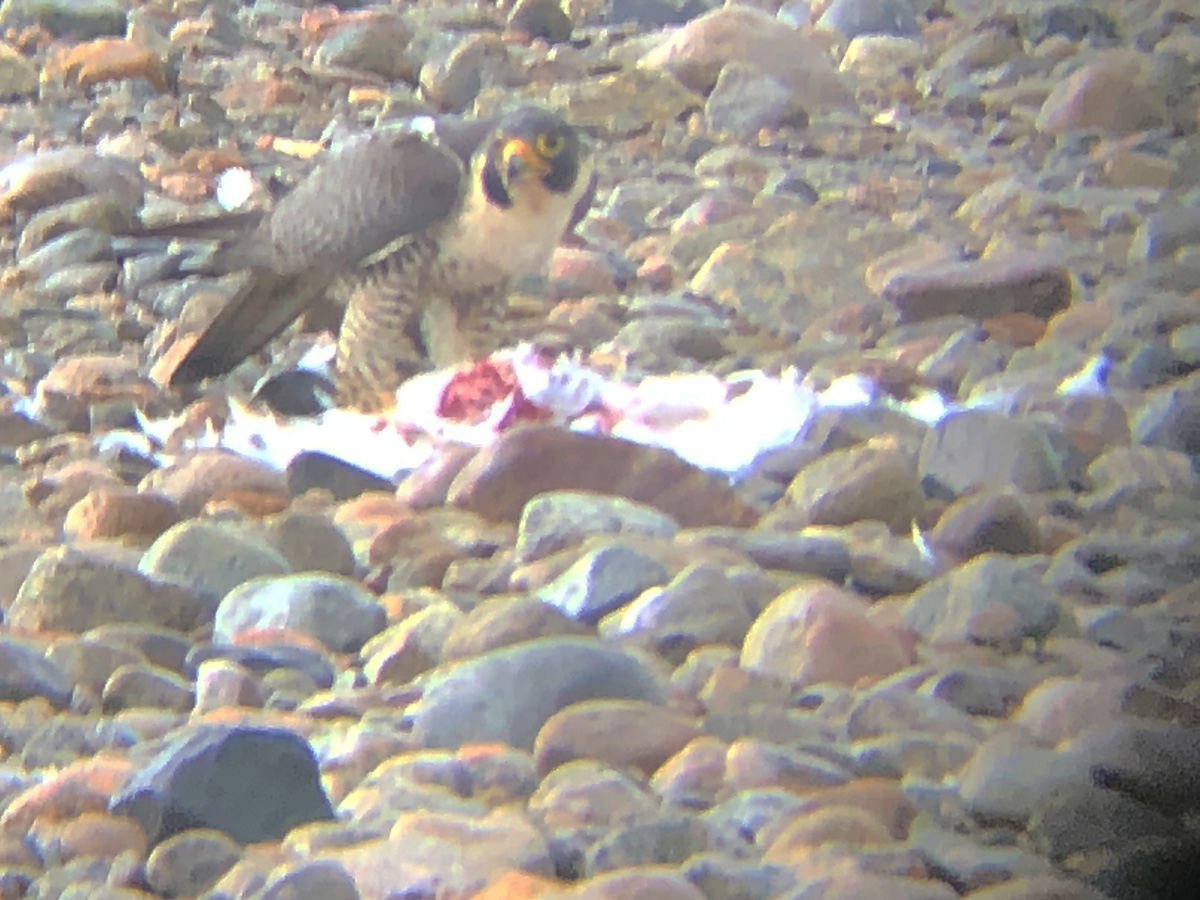 Posted at 21:01h in Uncategorized by sbt 0 Comments
0 Likes

I’m on vacation in La Malbaie. I took a 3-day road trip with my mom along the St-Laurence river. The landscape is playful with houses seeming to be dropped randomly on hills, fields, cliffs and beaches.  It is also majestic and mysterious with fog rolling in and views of the river where you can’t tell if its water or sky! We are staying in Cap-a-l’aigle which is just past La Malbaie. I woke up early this morning and it was wet and foggy, so I did not expect songbirds to be too active so i headed to the water instead to the docks and beaches in La Malbaie. As I arrived at the beach a group of about 45 seagulls took off and flew towards the open foggy water.  At least some, if not all, were ring-billed gulls. Upon closer inspection  of the beach a peregrine falcon had just taken one out and was devouring the gull on the beach! The photo above is taken through my binoculars as I did not want to disturb his breakfast by getting too close.  I got the chance to observe the falcon do a good job finishing his breakfast, not leaving much for the crow that was waiting his turn for the scraps.

The weather cleared up and I went to a public lilac garden at Cap a l’aigle. It was still only 7am. What an amazing garden and great time to visit to see the lilacs in bloom! There were sculptures along a path with a small waterfall and many varieties of lilac.  Beautiful. There were also some fruit trees in bloom with Red-Eyed Vireos, Blue-Headed Vireos, Cedar Waxwings, Goldfinches and Tennessee Warblers among the blossoms! The Tennessee Warbler was tough to figure out as I am not used to seeing them and did not know their song.  It looks like a vireo with a white breast, olive back and an eye stripe. But the song was more like that of a warbler.  It is a high pitched trill and fast with 2 parts. I checked all the vireos in my phone birding app to try to match the appearance and sound but none fit. I recorded the sound to work on it later.  Then I started scrolling through warblers and saw the Tennessee Warbler.  I checked the song and it was bang on!  Its fun and satisfying when you don’t know a bird and are successful in figuring it out on the spot!  Another bird that was in a group of trees nearby in the gardens was the Northern Parula among a large group of Pine Siskins.  The Northern Parula is a warbler and is another bird that I am not used to seeing. I’ve seen it once in Cape May but did not remember its song. I did not get  a close look and though it was a Blackburnian Warbler based on the song. I saw a flash of yellow that was not consistent with the Blackburnian, then I lost it.  Later I saw it again and got a good look!  I had to look on my app to match the appearance and it was a definite match with the Norther Parula.

That was a lot of birding excitement for me for one morning but actually it was not even 8am yet and I continued to go to different locations and saw many more interesting birds today before finally going to the Musée de Charelvoix.